UV protection has been added to the genoa jib. Matching Sunbrella fabric has been used as the mainsail cover, pedestal cover, doger, bimini, and side panels to form when setujp an added room in the coskpit.

Mac A Tack is powered by a 50 HP Yamaha. Great for water sports, and to get off the water in the event of an approaching storm.

Mac A Tack at Her Mooring

At the top of the pedastal behind the ships wheel is a Garmin 168 GPS Chartplotter / Depth Sounder. Also added at the lower left is a cockpit mike connection for the VHF radio.

Close up of the Garmin GPS Chartplotter / Depth Sounder. The unit can be used for navigation or to locate hot fishing spots.

The sink and Origo alcohol stove are mounted into a cabinet with tile heat protective counter. The fawcett is hand pump operated. Several storage compartment below assist in orgaizing galley supplies. The ice chest is under the starboard seat directly accross the isle. At the right side of the cabinet is a 110 volt outlet for small applicances.

THis is the standard Macgregor dinette arrangement. The table drops down to form an extra birth for an adult or two children. However, the rear berth (not shown in any of the photos, is prefrred and is king size.

The V Berth at the bow comforably sleeps two adults. The backrest of the dinette lifts out to provide extra room for a skipper who in his previous life was a basketball star. Over the V Berth is mounted two of the four speakers usde by the AM/FM/CD player. The other two speakers are in the cockpit below the seats on the port and starboard sides.

The head is equiped with a potty toilet. It has a built in freash water tank and waste holding tank and is easily disassembled for emptying at your port-of-call. The sink has a fawcett operated with a hand pump similar to the one in the galley.

Mounted on the interial bulkhead is a ICOM Standard Horizon VHP Radio synchronized with the GPS unit to send your longitude and latitude to the Coast Guard in the event of an emergency. Most frequently however, it is used to listen to the weather, communicate to marinas, or water taxies, or other boats in your areas. Also you can see the AM/FM/CD that provides excellent reception and powers the 4 coaxial speaker to undistorted sound at any comfortable listening level. Each item of electrical equipmnet is separately fused either on the main panel shown, or on the auxilary panel on the side of the galley.

At the front of the pedastal is mounted a table which can be raised for snacks or lowered when not in use. At the top of the table is a cup holder (now holding the mainsheet) which holds drinks in either the horizontal or vertical positions. The bimini is in its cover in the stored position behind the helmsmans chair. Alothough not shown the buff colored cockpit cushions are tailored to fit the cockip benches abd backs. Very comfortable when underway or at your pier.

UV protection has been added to the Genoa Jib and the same maroon Sunbrella has been used to cover the Main when furled. Mac A Tack also has a matching pedestal cover, bimini, dodger and sideskirts to form an enclosed room in the cockpit. 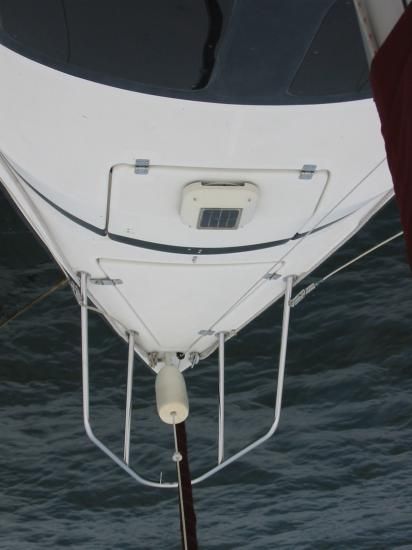 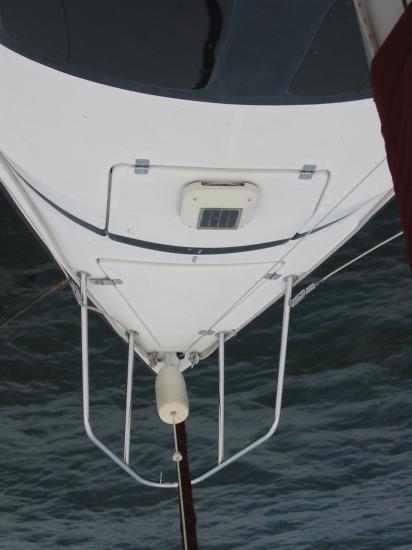 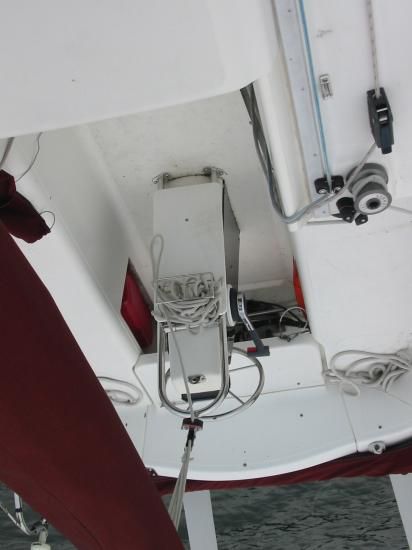 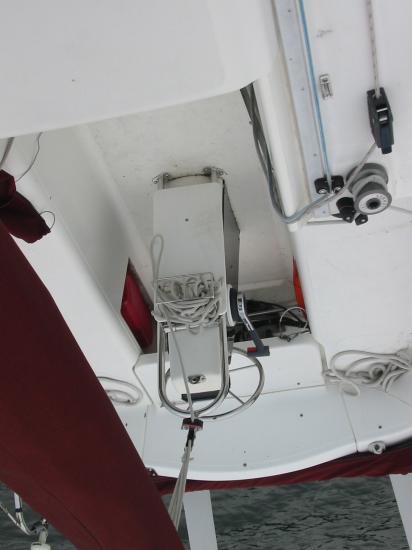 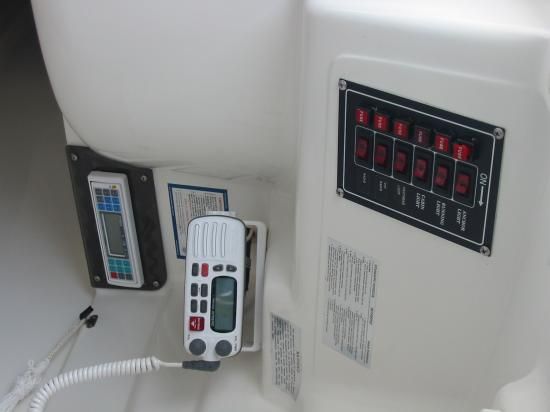 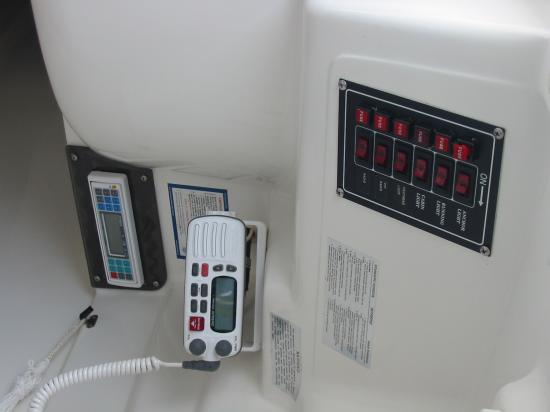 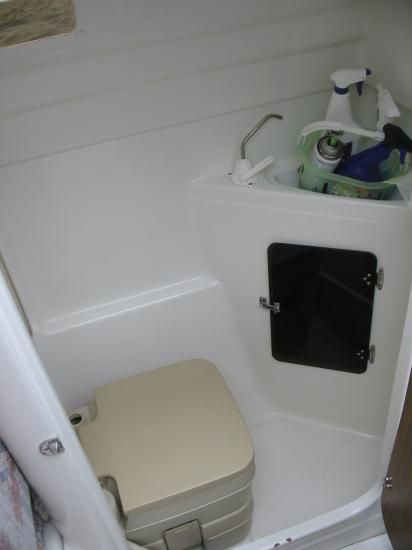 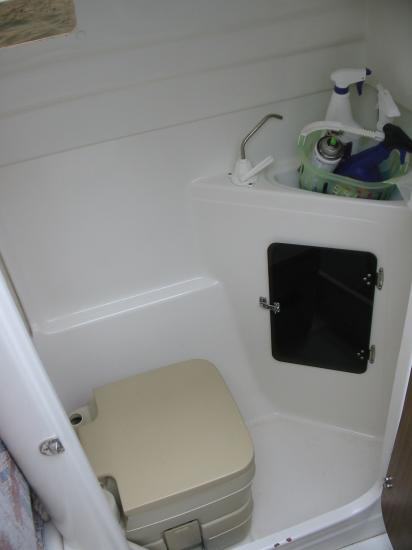 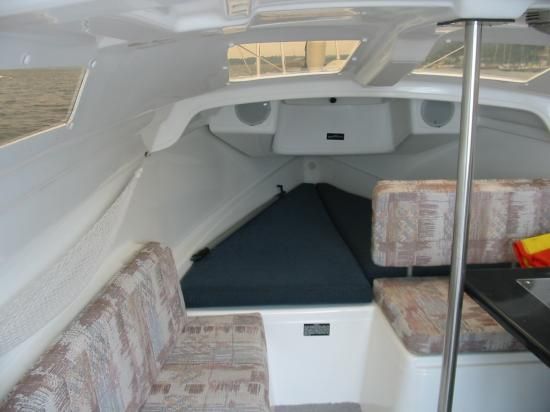 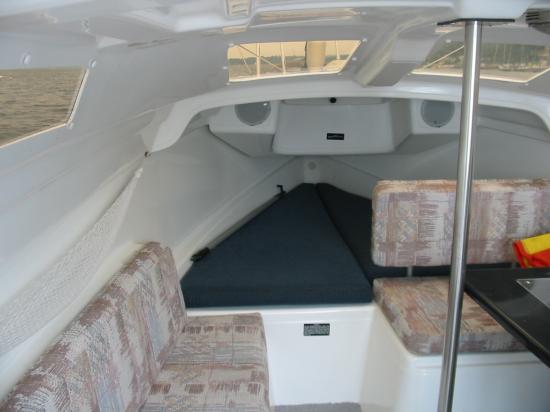 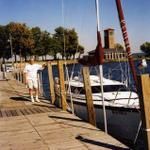 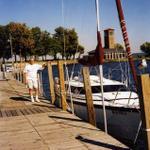 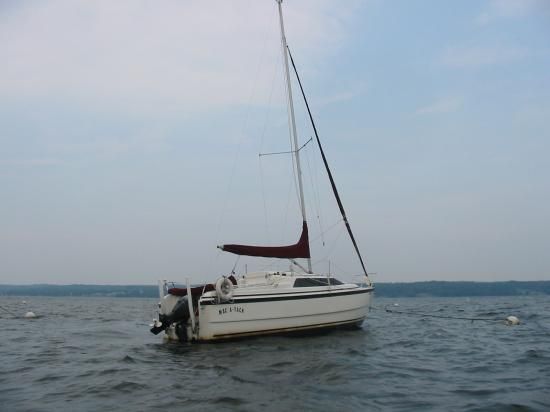 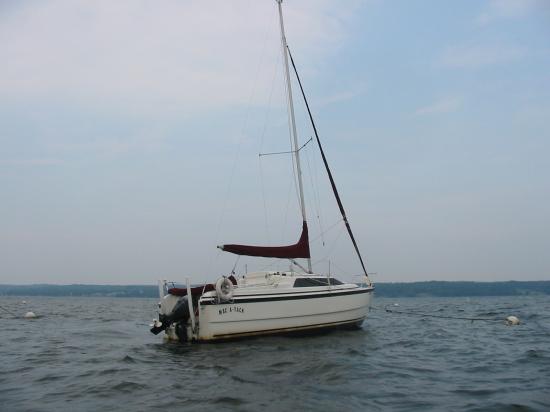 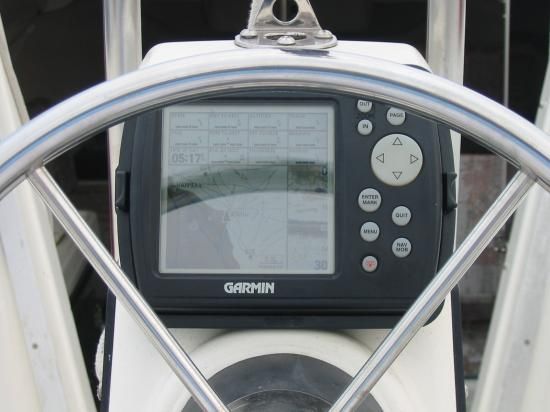 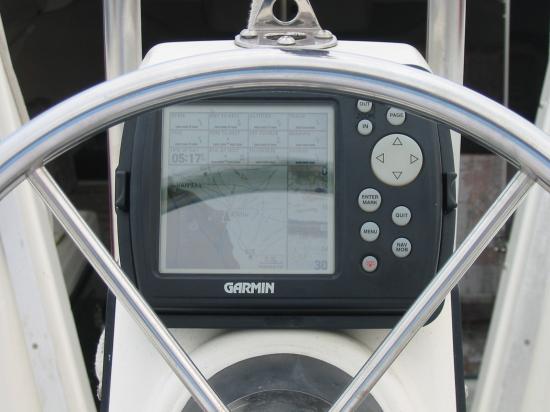 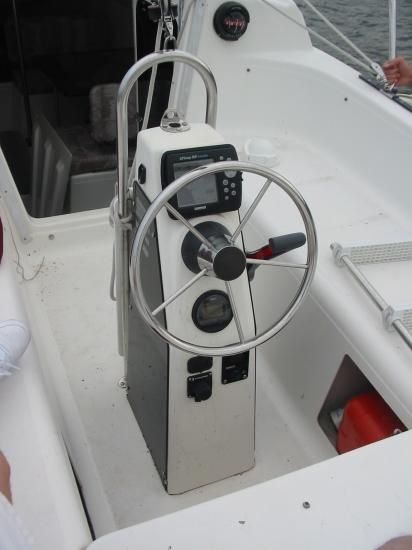 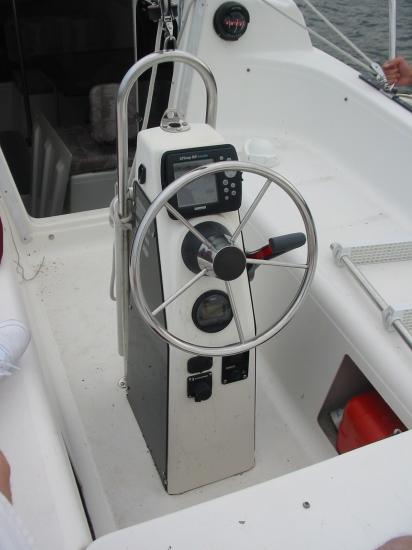 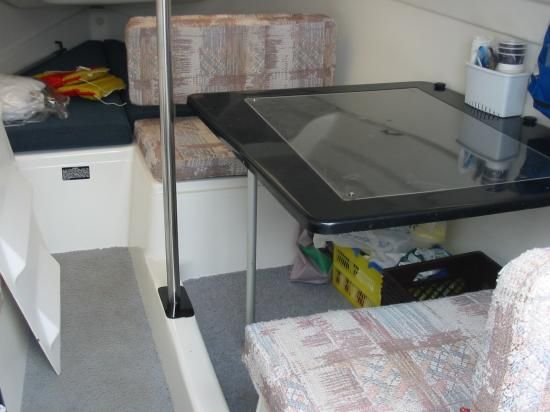 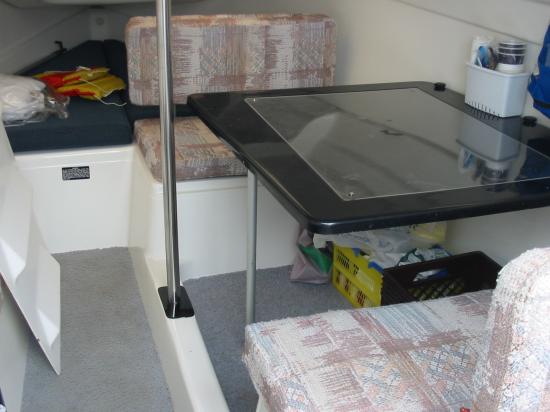 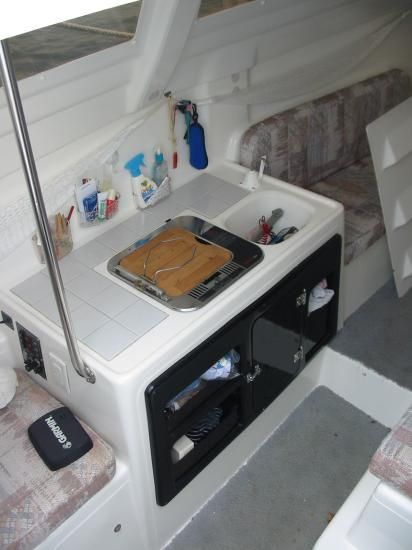 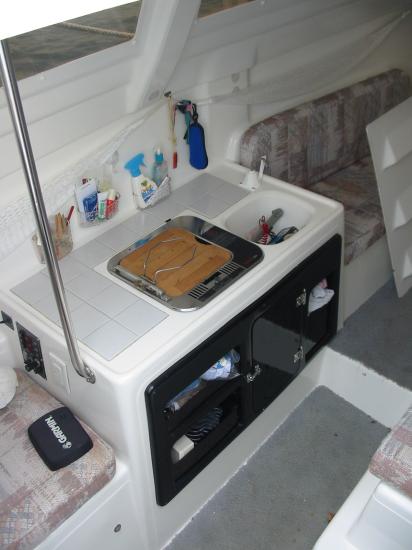 MacgregorOwners.com is not endorsed by or affiliated with any sailboat manufacturer.